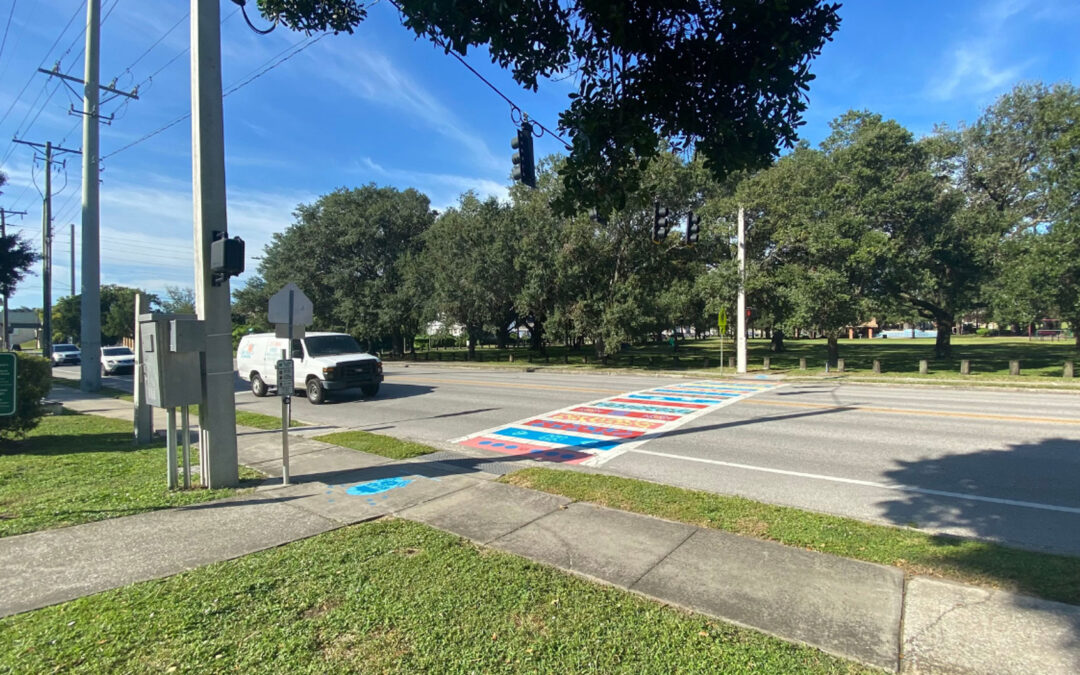 After safety concerns were voiced by parents and others, Wednesday, fifth-graders from the school will join Tampa Mayor Jane Castor and other dignitaries in a ceremony to unveil an improvement designed to slow the traffic and make crossing MacDill easier and safer.

The students and others will cut the ribbon on a “Crosswalks to Classrooms” street mural, the tenth of its kind in the City of Tampa.

The crosswalk across MacDill Avenue between MacFarlane Park and the school has been painted an array of bright colors and eye-catching designs as a method warning drivers of the school zone and that students could be crossing.

The safety improvement is the latest after complaints by parents earlier this year.

During a traffic study coordinated by the city and MacFarlane Neighborhood Association, city engineers observed more than 200 vehicles. The speed limit near the school is 35 miles per hour. However, the study revealed that most drivers were going around 42 miles per hour. The highest recorded speed was 55 miles per hour, according to city officials.

In Aug. 2021, a traffic light was installed at MacDill and Green Street as a method to slow the steady traffic as it approaches the school.

The new street mural will be unveiled on National Walk to School Day, a national holiday that encourages students to live active lifestyles.

“There are crosswalks that get old and faded, and our county’s failure to invest in transportation for the long-term has been a real problem for schools,” she said.

Mayor Castor said the crosswalks are just one component of the city’s effort to reduce traffic and pedestrian fatalities.

According to the city, Tampa’s first artful crosswalk was unveiled in November 2019 at Rampello K-8 Magnet School, at the intersection of Washington and Jefferson streets in downtown Tampa.

More enhanced pedestrian crossings are set to be painted near schools throughout Tampa this year.

If you live in the City of Tampa and want a speed study done in your neighborhood, you can request one here. You can also request that a pothole be fixed, or a sidewalk or streetlight be repaired.