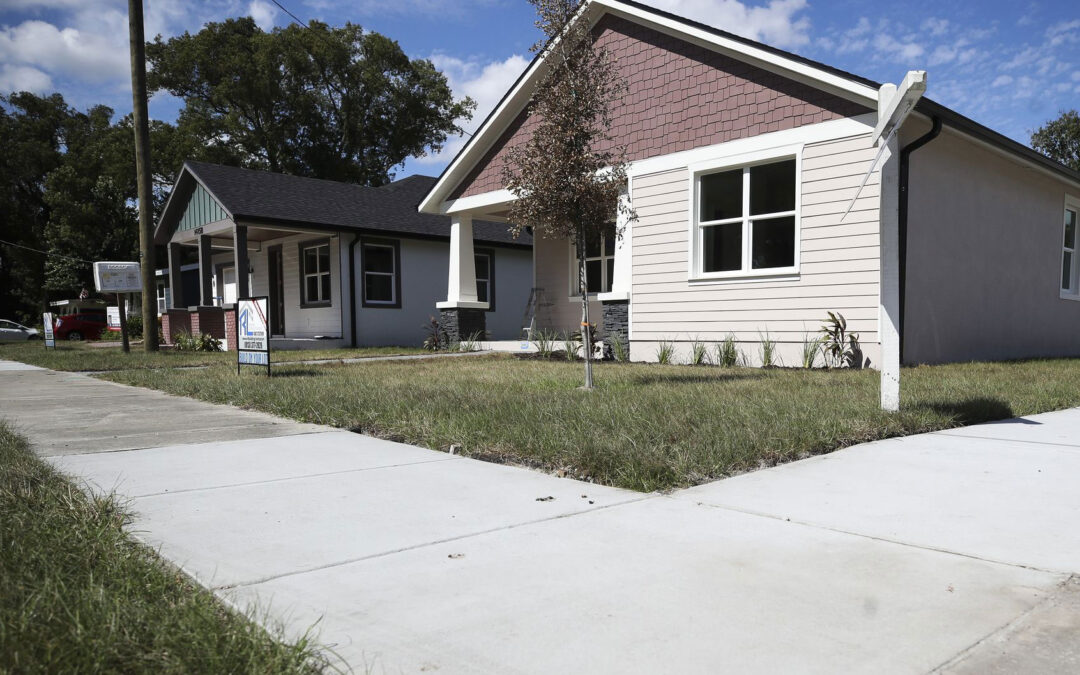 By Charlie Frago
Published 2 hours ago
Updated 35 minutes ago

TAMPA — In West Tampa, an area of Florida’s third-largest city notorious for its lack of sidewalks, Mayor Jane Castor met with reporters Wednesday to push for changes in city code that would force more builders to either build sidewalks or pay into a citywide fund.

In a city with 1,300 miles of streets without sidewalks, the mayor said builders of new homes or ones that are being substantially renovated have been benefiting from too many exemptions in current code.

Some of those loopholes include if a house is more than three blocks from a school, or one that has a utility pole in the right-of-way.

Currently, developers pay into a sidewalk fund if they don’t build a sidewalk, but city officials say those fees often haven’t been collected or have been too easily exempted.

“We haven’t been as strict on those “in-lieu” fees as we should have been,” Castor said at the news conference in Salcines Park at 1705 N. Howard Ave.

Castor urged the seven members of City Council to approve the code changes at tomorrow’s meeting.

Emily Hinsdale, a board member with WalkBike Tampa, a pedestrian and bicyclist advocacy group, said the city’s lack of sidewalks put its most vulnerable residents — children, seniors and those without access to cars — at risk every day.

“We need to find a safe pathway for them to enjoy our wonderful city,” Hinsdale said. “This sidewalk code change would be a key step, a very critical step, in moving Tampa toward a larger sidewalk network.”

Hinsdale has been active in advocating for sidewalks to be built near schools. Castor said that would be her priority.

The changes could raise $1.2 million a year in revenue and build up to eight miles of sidewalks a year, Hinsdale said.

Many new homes, or those being rehabbed, have drainage ditches along their frontage. Michelini said filling those ditches is prohibitively expensive. Others have utility poles, he said, which the city has to get permission from TECO to move.

Most of the home builders affected will be those who build one or two homes rather than large development companies. Subdivisions (defined in city code as three or more homes) already are required to put in sidewalks, Michelini said.

And state law, he said, prohibits cities from collecting fees for things that are never built.

“It doesn’t mean you get a free ride, it just means the city is never going to build a sidewalk and why should homeowners pay for it?” Michelini said.

The code changes aren’t the only flash point between Castor and developers. Her administration is also seeking to raise the “in-lieu” fees into the sidewalk fund from $29 per linear foot to $75 per linear foot. Developers say they’re willing to pay $40 per linear foot and charge that Castor is trying to make up for the recent Florida Supreme Court decision that overturned Hillsborough County’s one-cent transportation sales tax, which contained millions in funding for sidewalks and other pedestrian safety issues.

The code changes would only increase home prices in a city struggling with affordability, Michelini said.

Castor, who has said she thinks developers have enjoyed what amounts to a city subsidy, said sidewalks are too important.

“I don’t know you can put a price on safety, especially the safety of our children,” Castor said.

Council member John Dingfelder, who has the led the effort to change the code, said activists brought the matter to his attention in the spring.

“Council requested staff and legal close the loophole,” Dingfelder said. “I’m thrilled that the mayor and administration are supportive of this council effort.”